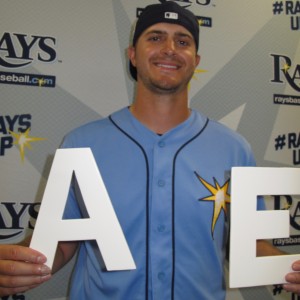 He is a major league pitching ace for the Tampa Bay Rays. We ran into him at Spring Training in Port Charlotte, FL; and he was upset.

He lost his vowels.

Since he is Italian, he really needs them, since Italian names often have a lot of vowels. Actually, EVERY word has at least one vowel – it’s an important spelling rule. Without vowels, you don’t have real words.

Just consonants, and they aren’t any fun without vowels.

So, the day we saw JK, he wasn’t having any fun. Oh, the baseball practice went OK, but when he got off the field, he could no longer say his name. JK was it. But it didn’t have a vowel to carry the sound.

He found a “U” and was JUK, but that wasn’t him. Someone else handed him an extra “A” they had in their locker, and it made him JAK – close but not it. Then, he found his missing “E” and became JAKE.

Soon, after, the found a pile of “I” and “O” letters and he was complete.

Starting Pitcher for the Tampa Bay Rays.“If we don’t use vowels when we write, people won’t know exactly what we want to say,” he explained. “Vowels are super important; without them, I couldn’t even say my name!”

View all posts by: sherry

Persuasive writing is writing where you try to convince someone to take a particular issue o[...]

Narrative Essay Examples In a narrative essay you tell a story, but you also make a point[...]

In descriptive writing, the author does not tell the reader what was seen, felt, tested, sme[...]

Exposition can be seen in music, films, television shows, plays, and written text. It is the writer'[...]

Write the Words to this Short Video

To practice writing and storytelling, watch this video, which has no words. Now, write the words. [...]

More of Our Stories